Both the android and the iOS apps are currently awaiting review from Google and Apple respectively. This means that as soon as they accept the app it will be available through Testflight on iOS and Open Beta on android!

I’ll share the links to them as soon as they approve them, so keep an eye out for that!

On a general note, I expect the TestFlight and Open Beta to last only a few weeks at max before I publish them to the normal release tracks on the app stores. Releasing them through these test channels will let me work on major bugs if they somehow occur.

The apps are starting to take shape, working hard to release a first version as soon as possible.

I’d say it’s about 75% done right now, this is the current list of things left to do for version 1:

As you can see, it’s not that much anymore! Hope to finish it within the next two weeks and release it soon after.

So while you wait, here’s a small preview (some parts still a WIP):

Did someone mention dark themes

Just wanted to give a small preview of what I’ve been working on the past few days. I’ve scrapped the original designs that I had for the apps and came up with something new. 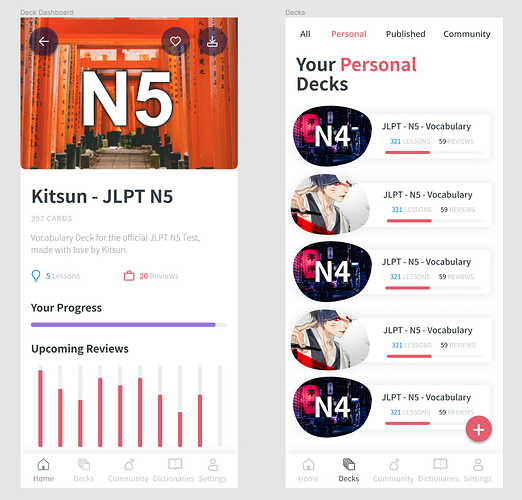 Some of the smaller details are not final yet (icons/navbar) but I think you get the idea. I’m about 70% done with the designs of all the screens (there’s quite some actually) and have also begun the actual implementation/programming of the app in Flutter (again from scratch).

It didn’t take me long to implement/code the two screens you see above with Flutter, so I think that once the designs are done I’ll be able to develop the apps in no time. I’m thinking about releasing a version without offline capabilities first, and then once everything works correctly, add offline functionality afterwards.

If I had to give an estimate of the time left before a beta version, I’d say around a month (but no promises yet

As you can see, the dictionaries will be integrated inside this app as well, but the Reader (for helping you read Japanese texts/books) will get it’s own standalone app afterwards. Reason being that it’s completely focused on Japanese and also requires additional assets which would bloat the main app too much.

With the link below you can view the progress of development:

Still working on the mobile apps for now. I’m now often switching between creating designs for other pages and actual app development/coding, whatever I feel like doing more at that moment

Here’s some new teasers of the app running on my testing device:

Obviously still in a relatively early development stage, but hopefully it gives you an idea of how its progressing

Next up are the dictionary pages and popups.

I’m loving how it’s looking! I tend to not use my phone for studying, but this is going to be great when I’m on the train or just bored in my bed.

I am 100% looking forward to this. While I don’t do a lot of adding words on my phone; I typically run my deck on my phone. The design is looking really good!

Just bought a subscription, and excited to start using Kitsun as my main SRS for vocab. To be honest, the announcement of the early 2021 iOS app is what really drove me over the edge to purchase. Looking forward to it! As a quick aside- I’m hoping there’s landscape functionality for iPad — that would really be great to see!

Thanks for all of the work @Neicudi !!

Glad to have you here @Narasumas!! I wonder what language you are studying through Kitsun, possibly Japanese? Regardless, I wish you the best of luck in your learning experience!

Cheers and welcome to Kitsun! Glad to have you on board

Thanks! I’m learning Japanese. I spent a year or two “finding my way” without any real good structure or tool set (that was a waste of time!), but over the last 1-2 years have been doing WaniKani, BunPro and some other SRS systems. Working through Genki as well. Anki was just too much for me. I liked how Kitsun was structured, so the holiday sale felt like a good time to jump in and start chipping away at the Core 10k.

Quick app question— Do you know if there will be support for notifications/badges? I group all of my 日本語 apps in one folder, and it’s nice to see how many reviews I have at a glance. The badges help with that. Just a suggestion. Thanks!

Also, unrelated question. When working through the Core 10k deck, is there a way to randomize the order I’m given my lessons in? Or is that not the recommended way of going through the deck? I saw it’s set for “indexed” order, but I also can’t see where I can change that. I still need to dig through some FAQ’s and learn more about Kitsun.

Quick app question— Do you know if there will be support for notifications/badges? I group all of my 日本語 apps in one folder, and it’s nice to see how many reviews I have at a glance. The badges help with that. Just a suggestion. Thanks!

You mean push notifications for reviews right? They are currently supported (on the browser version) on every platform except iOS devices due to Apple not allowing those for websites. The iOS app will definitely have push notifications available though!

Also, unrelated question. When working through the Core 10k deck, is there a way to randomize the order I’m given my lessons in? Or is that not the recommended way of going through the deck? I saw it’s set for “indexed” order, but I also can’t see where I can change that. I still need to dig through some FAQ’s and learn more about Kitsun.

Generally speaking I’d recommend following the indexed order for the 10k deck as it goes from easier (and most common) to harder vocabulary. For personal decks you can change the lesson order by yourself in the deck settings. For community decks the order is set by the creator to make sure users study it in the recommended order. Eventually this will also tie in with the upcoming “level” system where deck creators can choose to create levels out of cards in their decks.

Or perhaps having a level per vocabulary “theme”, lots of possibilities

I still need to dig through some FAQ’s and learn more about Kitsun.

Working on revamping that section as we speak! The current help section is very outdated, so let me know if you need any help or have any questions!

This looks incredible! So many apps do a half-hearted job on good UI, but this looks on point!

Minor detail: the image on the left side of each deck entry in the Personal and Community deck pages are a little too big. Yes, it looks cool, but it seems to be taking too much screen real estate.

Edit: Correction as I am still unable to differentiate between left and right.

Hello, I do all my reviews with the app, is there a way to add synonyms while doing them?

It’s on my priority to-do list to add this and the feedback popup to the apps!

I’ve tried to download the beta, but keep getting a notification saying safari can’t open the link: image|231x500

Do you have TestFlight (apple app) installed? It looks to me like it’s trying to open the Kitsun app link in safari instead of TestFlight. If you don’t have it installed yet, you can install it with the “View in App Store” link and then return to this page to get the Kitsun Beta app.

Let me know if it works!

Thanks for the response.

I do already have TestFlight installed. I had removed it from my phone and downloaded it again, just in case that was the issue. But still no luck.

I take it back. I’ve now got it working. When I said I’d reinstalled TestFlight, it turns out I did no such thing.

Appreciate your time however.