Known Words System and the new Kitsun Knowledge Base

The Known Words System which lets you filter out words you already learned in other decks. Please read the latest patch notes to learn more.

The Kitsun Knowledge Base which (hopefully) has an answer to any questions you might have. Please check the Knowledge Base for help on the most commonly asked questions. The articles were written by @Tomato who is one of the new Kitsun team members

Check it out here!

We will be expanding the knowledge base with more tutorials, FAQ articles and technical documentation over the course of the next few weeks, so do keep an eye out for that!

When this gets paired with the WK API I’ll pass out.

Edit: Now that I think about it, would it be possible to make a list of all words taught in WK (not user specific, just literally all of WK Vocab) and add them in bulk to the known words list?

Edit: Now that I think about it, would it be possible to make a list of all words taught in WK (not user specific, just literally all of WK Vocab) and add them in bulk to the known words list?

That’s definitely possible through having a WK Vocabulary deck or something (there’s an exporter userscript on the WK forums iirc). Otherwise you’d have to wait a bit for the above mentioned imports ^^

I’ve been waiting for the Known Words System and it is finally here!

I tried to mark words from my decks as known and is working flawlessly, surely an immensely useful addition to kitsun!!!

I have an additional consideration which is not directly related with the Known Words System. It’s just that I thought that this (very small) problem I’m having would be solved by it (but now that I think about it, it didn’t make sense).
I’m creating a deck for a manga (I hope to publish it within a couple of week), and I’m making heavy use of the “Reader” to add cards to my deck. My problem is that sometimes I don’t remember if the word I’m adding is already in a deck. It would be nice if the popup on the reader would also show a flag indicating that the card is already in some deck.
Of course I’m easily able to remove duplicates from within the deck, so not a huge problem

Thanks again for this release!!!

I couldn’t find a way to mark a word as “unknown”. It could be useful in case of “mistakes” for example.

I plan on adding a “known words” management page, as I’m sure it will be useful to remove/add words manually later on

These two kinda fall out of the scope of the system for now. The word lists have to be as simple as possible for it to work well and to prevent data from running out of sync (and having to be updated with every change the user occurs). I definitely do get why you would want it to work like that though.

Finally go back to deck 1 and want to hybernate known words of deck 2 .
What I should do is to filter for “level 0” cards (only on deck 1 ) to avoid hybernating not fully studied words forever.
I think that leaving this filters to the user can be risky .
I hope my explanation wasn’t too confusing

Yeah that’s true, I also thought about adding a general action “hibernate unlearned known words” action so that you don’t have to manually select the known cards without progress, but I feel like the actions dropdown is getting way too long to begin with and it becomes a bit confusing having so many actions available

It would be nice if the popup on the reader would also show a flag indicating that the card is already in some deck.

I’d love for it to work like that, but sadly it could mean potentially scanning 100.000s of cards dynamically (look up the main field id in the template -> search through the field values of each card to find out if that value matches with the main value of the result) which right now wouldn’t really be feasible

As you mentioned, you can relatively easily find them and filter them out later on though but I definitely get how it would help you with the card creation process.

Thank you for your reply and explanations!
I absolutely understand your points and totally support your decisions

This is one function I have been hoping to see implemented! It’s an absolutely fantastic improvement! Kudos, @Neicudi, it makes Kitsun an even more valuable resource than it already was!

First post here; just wanted to say you did a wonderful job with this. It’s very useful, thanks!

I have a question about the known words system since I’m a little confused as to how it works. When a word is marked as known, does it automatically hibernate in other decks?

When a word is marked as known, does it automatically hibernate in other decks?

It doesn’t. When you mark a word as known, it gets marked on the other decks as known but not as hibernated. Being a known word is different than hibernating. This is because people might want to be learning the same word for different purposes. If you want to indeed hibernate any known words in a deck, then you search for known words inside the manage table option, select them, and hibernate them

Glad that you were able to fix your problem! Feel free to ask if you have any other questions.

Just to double check, can I click “Add to known words” to my personal deck that is not published? Are there any consequences? I used default layout with dictionary builds so I expected the known system would initiate but there are many not registering. 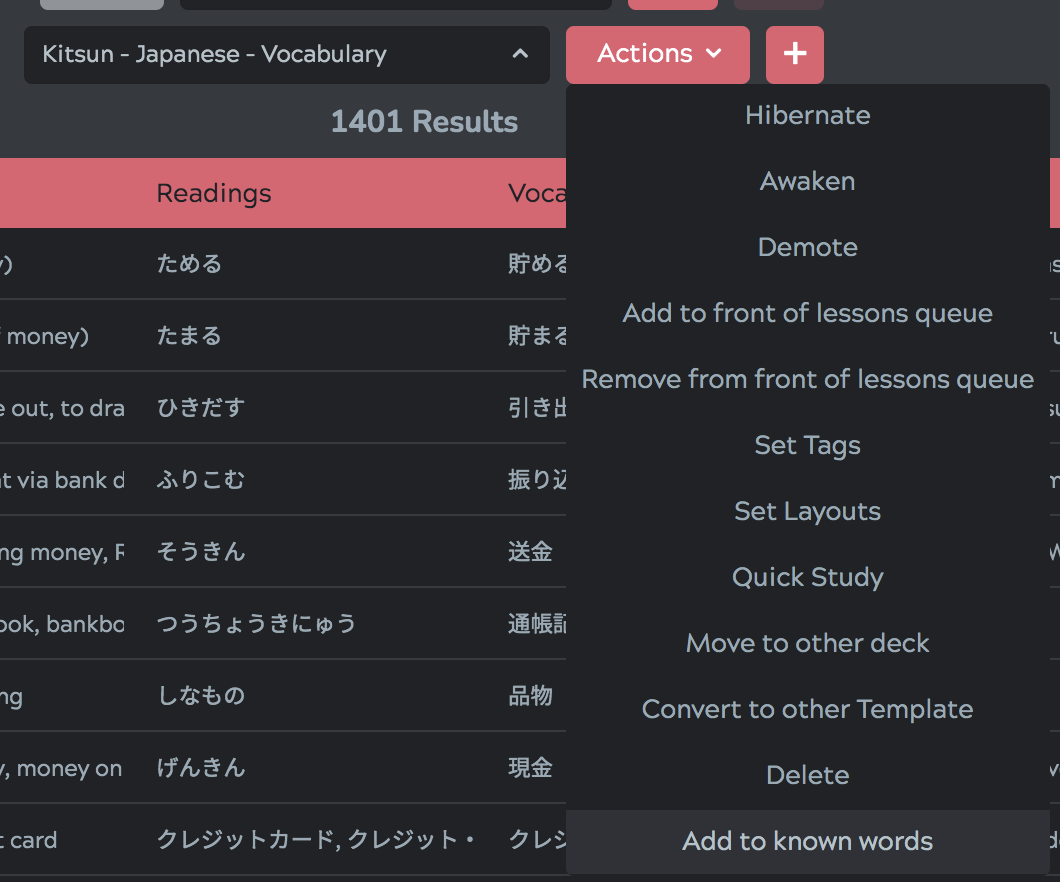 Yeah that’s fine, it works the same way regardless of whether the deck is private or published. There are no consequences aside from those words being added to your known words.

I just took a look at the deck from your screenshot and noticed that all the cards are at a high rank, in that case you do need to add the words through the above shown menu first as it only automatically adds newly learned lessons, not items being reviewed.

@Tomato finished writing knowledge base articles about the known words system a bit ago. I’ll try to publish the articles asap so that there’s some proper documentation about the feature 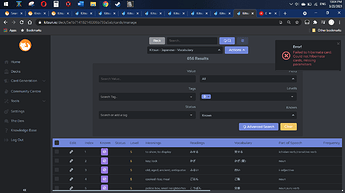 Hello. I want to hibernate some cards but this is happened.
It seems that I can’t get the parameters right but I don’t know what it was.
Any solution with this?

Did you select the cards that you wish to hibernate? You can select them all at once if you click the checkbox in the table header.

I have tried and its work!
Thanks a lot

Is there a way to filter decks based on known cards? I just want to hibernate ‘known’, but I don’t see a tag status to do this…just checking if I’m missing anything before I manually do this.

Edit: I found it

Is there a way to automatically set words to be hibernated in other decks once you learn them in another, instead of having to manually find the words you just learned in other decks?

I’m afraid that there currently is no way to do that due to the inner workings of Kitsun being so dynamic (templates, template fields, main values etc). Technically speaking it might be possible but the query would become extremely heavy and slow and would need to run anytime any user completes a lesson.

Another problem that could arise is that some decks teach other aspects of a language, so if you have a deck focused on writing (as an example) you probably would not want it to auto hibernate when you finish a lesson in another deck.