Get the set here

This is my very first public set! It is centered around memorizing 敬語, since that is something I have a lot of trouble with. I’m a bit nervous since this subject is a bit hard to understand and I don’t want to mislead people, but I’m confident that I have gathered up a sufficient explanation and everything in the set so far is properly categorized.

Any feedback is appreciated!

In short, Keigo is a respectful and more formal set of words and conjugations generally used to show respect: in the workplace, to older people, to people of higher standing, to otherwise remarkable people, and so on.

丁寧語 (ていねいご): Teineigo refers to the ます (masu) form as well as the other standard “polite” words, like です (desu). While this is considered a form of Keigo, according to my sources it is not considered quite as polite as the other Keigo. Because this form is regular and you will no doubt find Teineigo conjugations very early on without this set, I have decided not to include them in the set.

尊敬語 (そんけいご): In English, this is referred to as the honorific form. The honorific form shows respect to the listener or third person when talking about their state/actions.

謙譲語 (けんじょうご): In English, this is referred to as the humble form. The humble form shows respect to the listener or 3rd person when talking about the speaker’s own actions that involves the listener/third party

Why study Keigo with this set?
Generally when you’re studying a word, you learn the kanji, pronunciation, and meanings. However, with Keigo words, it is also important to know the category as they have different uses (described above). This set will make sure that you know that category for each special Keigo verb. Of course, it will also make sure you know the special verb pronunciations and what casual verbs they correspond to!

How will this set be changing/updating in the future?

This is very cool deck, always nice to have more keigo practice, can never have enough. I will check this out more, thank you!

For phones, it looks great to me. It’s framed nicely without any wasted space. 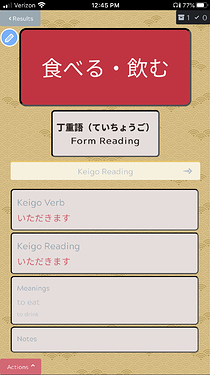 Was it intentional to keep masu form only and not verb stem?

If you are looking for another category, it would be fun to have a translated to keigo form; have a provided standard sentence and the answer is a teineigo/sonkeigo…just a thought and not sure if your current template is built for it. For those of us not living in Japan, the instances to practice are slim so there is always this internal translation to convert a standard sentence into a humble/honorific form.

Thanks, I agree it’s great to get some practice in even if it’s not something you use every day. And thanks for checking it out on the phone, glad to hear it works out visually.

Was it intentional to keep masu form only and not verb stem?

Yes. While I usually prefer to just have the plain dictionary form, for Keigo I decided to use the masu form because (IIRC, correct me if I’m wrong) they aren’t generally used in the plain form (even in situations where you would switch from Teineigo → Plain). Also, since a few Keigo verbs have irregular masu forms, it helps makes sure that people aren’t thinking that Keigo like いらっしゃる are いらっしゃります instead of いらっしゃいます. I’m still considering adding in the plain forms as a possible reading, but I want the ます form to be the focus.

That’s a great idea, adding sentences! I don’t know when I’ll get around to it b/c I’ll have to dig up my old book to give the best examples possible, but I’ll definitely try to add that sometime and see if it works out.

And same, I find it hard to remember just b/c I’m not running into these situations daily, whereas I believe it’s a lot more common when you’re actually in Japan. If not in the form of people talking to you, it can be seen on signs and stuff.

If you need reliable+free resources (and the ease of copy and paste), here are some suggestions:

Maggie Sensei has 3 pages dedicated to humble/honorific. I imagine it’s easier to get the proper keigo form, and transfer it for regular polite/plain (or whatever you want). If you want people to cross check, I’m happy to help and I’m sure the community can chip in too. The first link actually has both included already.

Japanese test 4 you has great resources too, though the pages are less organized but I believe most are probably within N4. Didn’t find much on TK

Again, these are only suggestions if this is what you are looking to do.

Thanks for sharing! Always fun to see the creative layout designs of others

. I was going to report because I had to keep switching between Eng / Jp keyboards. I didn’t check today, couple of days ago it could not accept kanji readings even though they were in the answer (not sure if this changed but if I don’t need to switch keyboards, this is probably not an issue).

FYI: the order is locked in for the answer and will be marked wrong for different sequences (see below). Also for this entry, you may want to add おいでになる into the notes as an alternative to いらっしゃいます。 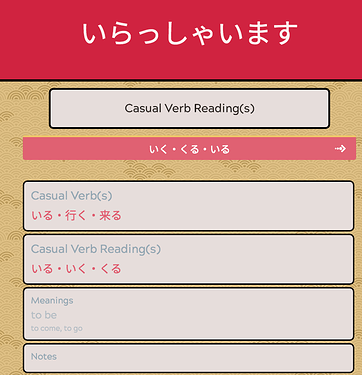 If you are looking for more values:
借りる→拝借する（いたす）（敬譲語）

Thanks for the resources! I’ll be looking at them later to pull some more example sentences to practice with.

Also for this entry, you may want to add おいでになる into the notes as an alternative to いらっしゃいます。

Thanks for the info! I had just found おいでになる when I created the set, so I guess it flew over my head. I added in a note, and when you are prompted to go from Plain -> 尊敬語 I added a number to help figure out which one it’s asking for (that’s my best idea right now, open to suggestions).

FYI: the order is locked in for the answer and will be marked wrong for different sequences (see below).

Yes, that’s a bit of an annoying problem, I’m not entirely sure how to make sure that people type in all three without forcing it to be in that order. Do you have any idea how I could fix that? If @Neicudi could give any advice for that I would appreciate it, though I hope it’s not overbearing of me to ask.

借りる→拝借する（いたす）（敬譲語）
I was looking it up just to verify, and are you sure it’s not はいしゃくする? I might just be reading this wrong. Either way, thanks for bringing to attention another 敬語 word!

I added in a note, and when you are prompted to go from Plain -> 尊敬語 I added a number to help figure out which one it’s asking for (that’s my best idea right now, open to suggestions).

You are correct (はいしゃく), I just meant that いたす can be substituted instead of する for extra humbleness according to what I read.

Yes, that’s a bit of an annoying problem, I’m not entirely sure how to make sure that people type in all three without forcing it to be in that order. Do you have any idea how I could fix that? If @Neicudi could give any advice for that I would appreciate it, though I hope it’s not overbearing of me to ask.

The usual thing to do here is to make alternative readings in your values by separating them with a , or ; or 、. So something like:

いく, くる, いる will allow you to put in any single one of these and it will be marked as correct. if you want to make sure they type in every form as a single answer, I’m afraid you’d have to add all possible combinations. Like:

Gotcha, in that case since there’s not many I’d have to do that with, I’ll just add in those as a possible reading.

It might be better to have an on-hand key that one can collapse within the card layout, or a usage example or something? I say this because it’s all well and good saying a word is ていねいご, but it’s not any good if I don’t remember what that is

Either way I love the layout! you did a fantastic job, I’ll be sure to try it out ^^

Thanks for the feedback! When you say an on-hand key, you mean for how each form of keigo is used?

And thank you, tried my best to make it easy to read and pleasant to look at. I’m no graphic designer, but it’s really fun to make different layouts, and I study a lot of different sets so it makes it more clear which one I’m on if I go off for a bit and forget. Still adding to it and making modifications, but I’m doing it very slowly because I have many other things to do, studying being one of them.

@s1212z I just finished adding the possibility to input any combination of the verbs so long as they are seperated by ・. While I was doing this though, I realized you can also use 、 to separate terms, so I’m considering changing the ・ to that. Would that be convenient for phones (if you could, try typing in the regular comma which I think autoconverts)?

I tried it out but it didn’t take it. Is it dependent on the which language comma? 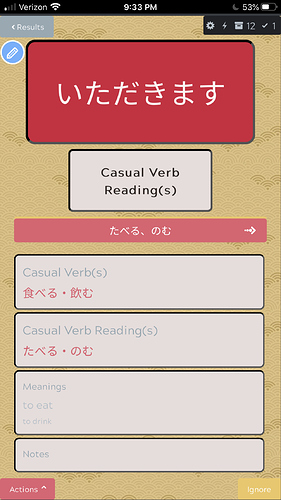 you mean for how each form of keigo is used?

Oh I think I phrased that question wrong. I just wanted you to try and see if it was convenient enough to type in 、 while doing Kitsun.io on phones, right now it’s not an accepted input. For now, continue inputting ・ to separate the terms, but I will be replacing that with 、 later today.

That’s a great idea! However, need to figure out how to implement it, tried implementing a collapisble box yesterday but nothing I did seemed to work

But I’ll keep on trying to figure out how I might add something like that. For now, there are descriptions at the top of this page, and there are a small amount of example sentences with explanations in the note about why they are used.

Got it, thank you for making the change! I’ll test later then.

Yes, either phone or computer, the comma is easier since there is no need to flip the language keyboard.

Were you trying to do this with javascript? Kitsun does have a few built in ways to achieve this

Oh, is there a section in the knowledge base about that? I always forget to check.