Any way to tell the system to mark me WRONG if I don’t type the 100% exact answer to a question?

This is important for kana!

You mean on your own templates? For English (or rather alphabetic) input you can use {{spellcheck:fieldname}} to force exact inputs.

The kana inputs (like {{type-ja:fieldname}}) don’t accept typos, so I think it’s already the way you want

When i say important for kana i mean in the case of my deck that asks for the user to romanize kana. If the answer is sha I can’t have the system accepting shi. Where exactly do I put that bracketed command?

You’d want to go into your layouts and edit the ones being used. I have a feeling you might be using the default layouts rather than your own copies, and those aren’t easily editable.

In that case what you can do is the following:

Go to the layout that you wish to change (e.g. japanese -> english) and duplicate it (there’s a button above the preview). Then you can do the change that acm suggested above (in the Front and Back fields).

After saving it, you will need to set the new layout as the replacement for the one you were currently using in your cards. After doing that you can update your community deck.

If you need any help, let me know and I can do it for you or support you somehow

Coincidentally, the update that I’m going to deploy in a few minutes will have a new feature where the user can toggle on the spellcheck for a deck themselves, regardless of the type of input being used in the layout.

never mind i found that function

one other question, this time about layout. i took out all the unnecessary fields but now there is a big empty box in my layout where the jisho dictionary etc. links used to be. i don’t want a gap there. how do i make the div move up to fill that empty space?

There is! Go to the card overview page of that deck (the ‘all cards’ button at the bottom of that deck’s dashboard).

On that page it should load 100 cards. Once you scroll to the bottom you can hit the ‘load more’ button to load 100 more (so hitting it twice in a row should load all your cards).

Scroll up to the top of the table to select all cards with the checkbox in the header. Hover on the ‘actions’ button at the top and click on ‘Set Layouts’. From there you can override all the current layouts for all cards. Make sure to select ALL layouts those cards need, not just your new one (in case you have more than one layout per card).

Then after doing this for your own personal copy, you can push the update to the community deck

The styling is shared for the default template (and layouts) and can’t be changed.

Sorry about that, I should have known that question would arise.

You can make a duplicate of the template, after which you can change the styling to make it look like you want. However, there is no easy way for you to change the template of all cards at once by yourself. I can set it straight for you in the database though.

i think i figured it out. since i took out the links block, that has an empty spot. but if i change div class=“english block” to div class=“links block” and put the meaning in there, it seems to do what i want. hopefully that isn’t janking up your CSS too much. 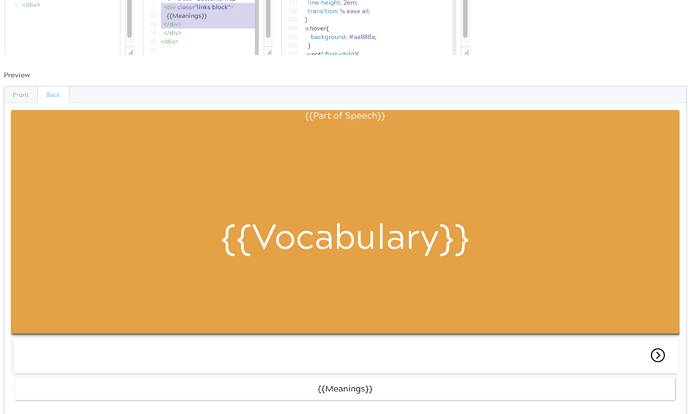 i learned something about CSS grids today, that is nice

Oh that also works yeah, I figured you wanted the block to take up the whole bottom space, but just putting it there looks fine as well ^^

You can put code in here by typing ` three times, pressing enter, put your code below, press enter again and type it three times again