I’m curious as to other people’s lineups so here’s mine! 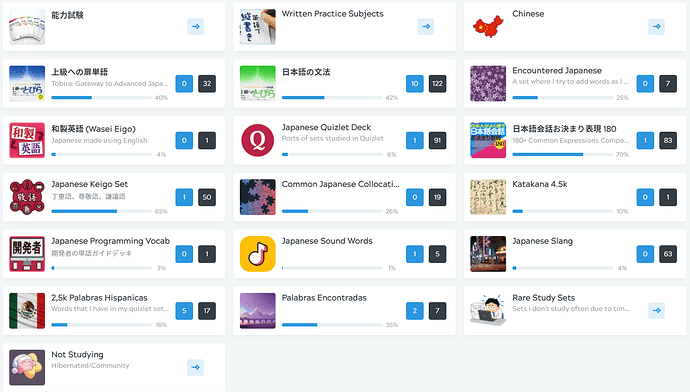 So I start with folders because it’s easier to have them at the top I feel.
I have all the standard JLPT decks in the 能力試験 folder. I don’t study them often, but they are definitely useful.

The second image shows the “Written Practice Subjects Folder.” I use my “Trouble Words Review” to specifically target leeches. I use 見つけた漢字の練習 for practicing reading and writing Kanji that I find on my own. My one complaint about Wanikani (and someone correct me if I’m wrong), is that you can’t seem to turn on specific kanji that you are already using / have found in vocab you are learning.

The Chinese folder has all the things I’ve made so far. The Common Hanzi & Chinese HSK are useful, but I’m still in very early stages of learning Chinese, so it is difficult. I would publish the Basic Chinese Phonetics set, but I don’t know how much interest there would be, and it’s missing a few things that I already understand from previous language and linguistic experience.

For the main page, it’s ordered by importance for the most part. Since there’s a lot sets, I’ll only do the ones that I feel need an explanation. I obviously need to focus on textbook words & grammar for school. Next is encountered Japanese, as I think words I find IRL are pretty important to study. The Japanese Quizlet Deck is a large amount of vocab I studied before coming to Kitsun on Quizlet. I still study the Katakana 4.5k set sometimes, but not nearly as much because of the Wasei set. I’m not really a fan of the Japanese Slang set anymore since the original source (Memrise) never gave proper explanations for the vocab.

The main exception to the importance rule is my Spanish sets, since I wanted to make sure they stay together. The 2.5k Palabras Hispanicas all come from my old Quizlet sets. Palabras Encontradas (PE) is the same as the Encountered Japanese set but for Spanish. I don’t really need a bunch of sets for Spanish like I do Japanese because I’m much more familiar with the language.

Finally, I rarely study 10k Kitsun & Japanese Foods. 10k is a very useful set, but I have so many already that I don’t think it’s essential to me. Japanese foods is a good set, but I have a hard time justifying taking the time when I don’t have to do any input for it.

Also, good luck with the All in One Kanji deck! Does it include Kanken or?

So there ought to be overlap, but definitely not a Kanken deck (at least for the highest two levels). Kanken also tests idiomatic expressions, complex radical names, traditional character forms, etc…