The same way that there’s a Fire Fox Celebration Thread 🎉 🦊 🎉, I think it would be a great idea to celebrate other feats on Kitsun like completing a deck, grabbing about your Days Studied or any other future stats that @Neicudi might spoil us with 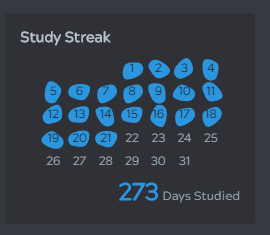 My count is 100, and I think that’s a small achievement in itself given this year. And yours is all the more so for the same reasons 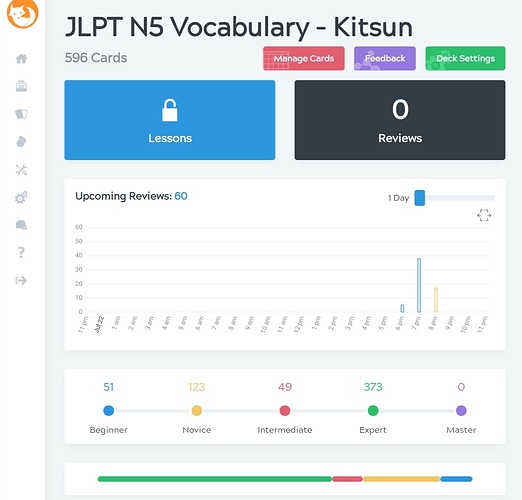 N5 complete! Next up, N4 deck, or maybe a return to WK by the end of the year for N4 kanji.

My achievement is getting my reviews count down back to 0.

When I first started using Kitsun and ported my sets from Quizlet, I wasn’t really using it right and ended up binging like hundreds of terms for a Japanese set and a Spanish set in a few days. I already knew most of the words and just wanted to review them, so I didn’t think it would be a big deal. Quickly realized my mistake when I had 1000+ reviews to do.

So, by creating that huge of a backlog in reviews, it made it pretty hard for me to review personally. Since then, I’ve picked up a lot of other sets and just kinda ignored those messy sets for a while.

However, a few days ago I decided to solve my problem. I pretty much just reset all of the terms that weren’t above a certain SRS stage, and then tackled the ones that remained. It took a while, but I got them all down!

My homepage looks so much better now:

The two problem decks (I demoted a lot of words, but it was totally worth it)

Not really an achievement so much as a minor celebration, but here’s the Kitsun equivalent of WK’s “0,0” - but without the stress and so much easier to achieve in a day:

The next 1k will be twice as quick

Who’s going to do reviews with me for the whole month? 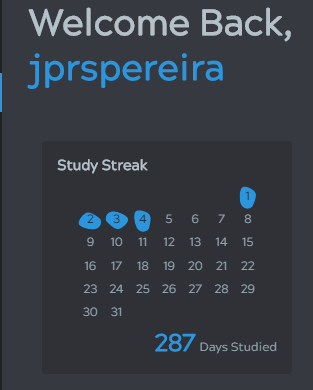 Well, not me. But I just realized you are the only non-staff non-bot regular! Congrats on that

Well, not me. But I just realized you are the only non-staff non-bot regular! Congrats on that

When you say that, do you mean people who have been here for a long time, or people who regularly post on the forums?

Lost before I started

BTW, is calendar day local to user? Pretty sure I Kitsun’d on Aug 1st 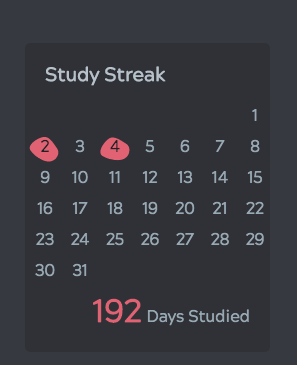 It’s server time (London based). A timezone setting is still on my to do list.

Also, I’m here very comfortably having the same timezone as London so it isn’t a big of a deal to me… but I’m sure a timezone setting would be loved by so many people, the same way that the wrap-up feature did!

BTW, is calendar day local to user? Pretty sure I Kitsun’d on Aug 1st

Another thing to take into consideration is that it only gets marked when a card goes up/down in rank. With sibling delay on, if the cards don’t go up or down in rank, it won’t be considered for the calendar streak.

Neicudi is also aware of it and it’s on the plans to be fixed afaik, but until then it’s something to be aware of!

When you say that, do you mean people who have been here for a long time, or people who regularly post on the forums?

Neither, I’m talking about the actual “Regular” status (I could look up the requirements, but they are boiling down to visiting very often, reading a lot, giving a bunch of likes and receiving a bunch as well)

Edit: you are well on your way to get it too! Only 6 more days, I think.

Oh that’s cool, thanks for the info!

The user trust system is a fundamental cornerstone of Discourse. Trust levels are a way of… Sandboxing new users in your community so that they cannot accidentally hurt themselves, or other users while they are learning what to do. Granting... 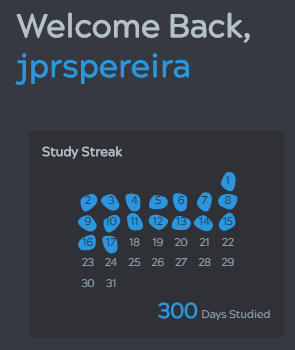 And I got the full month complete! 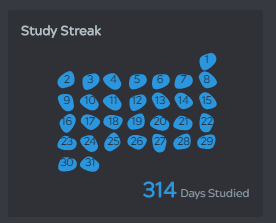