Please use this thread to discuss anything related to the official Kitsun N4 community deck.

We hope you enjoy the deck!

I was going through the deck to hibernate all the cards I knew. To quickly run through it, I just spam clicked “Load More” until everything was visible and I could check through them. But at the end, there are just loads of blank/empty cards.

(I’m assuming this is related to what I mentioned earlier on the WK thread, but you can very easily accidentally make blank cards just by hitting “Save” again when building new cards.)

At the end of every jlpt deck, there are kana-only words. It seems that those kana cards are actually not using the correct layouts so they display empty. Pretty big bug!

Wouldn’t it make sense to add furigana to words that use kanji above the intended JLPT level? Because JLPT N5 and N4 include vocab with kanji from higher levels (didn’t check all of them, but at least kanji from N3 and N2 are very common). That makes it harder to study the vocab for the JLPT.

(Easy examples: 探す - contained in the N4 deck (which is correct). The kanji 探 is listed as N3 on Jisho though - so an N4 student is more likely to encounter it in kana or kanji + furigana anyway. Granted, there’s some overlap between JLPT levels, because of the different difficulties used. A better example might be 枝. That’s an N2 level kanji. Or 掛ける. Using an N1 kanji)

The vocab is considered N4 level, but the individual kanji is not. I’m not 100% sure whether the JLPT adds furigana (pretty sure they do)?

But considering you are also being tested on reading, I kinda think it’s a non-issue as you are already learning the furigana part through that?

I don’t really learn something new from this deck, just testing a bit how it works.

I’m generally adding a lot of synonyms, coming from WK gives you some expectations for acceptable answers.

I’m posting because I found something that is definitely wrong, “生活する => せいかっする” should be せいかつする.

But considering you are also being tested on reading, I kinda think it’s a non-issue as you are already learning the furigana part through that?

Yes, but that’s kinda my point. It makes one study more than what is needed for the exam

I’m posting because I found something that is definitely wrong, “生活する => せいかっする” should be せいかつする.

Thanks, I’ll put it on the list of things to fix asap

Yes, but that’s kinda my point. It makes one study more than what is needed for the exam

I’d argue that knowing the reading is just as important to your overal studying, regardless of whether it’s really important for the JLPT exams though

I’d argue that knowing the reading is just as important to your overal studying, regardless of whether it’s really important for the JLPT exams though

Of course they are, but these decks are supposedly for test preparation

It’s not a huge deal though, obviously.

I was using my phone for once, and found that the wrapping is super weird. 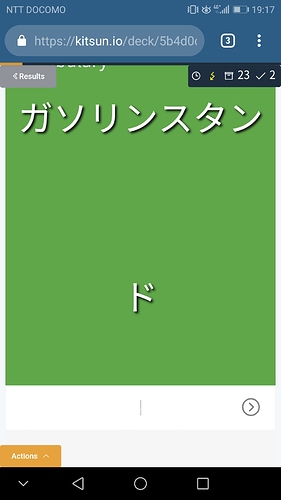 I have to update the deck to use the newest version of the layouts. I think that should fix it.

(The wrong vocab was fixed a while ago btw)

Is there a reason why 受ける has been translated as so? It doesn’t appear as any of the definitions on jisho, and I’ve never came across it in this context outside of 受 being used in 受験 (taking a test/exam): 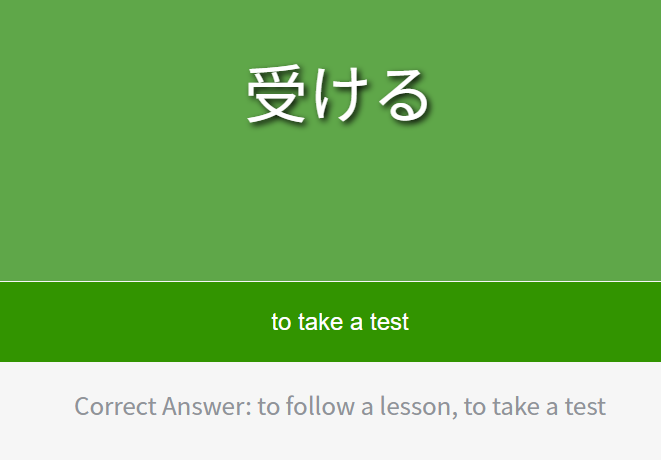 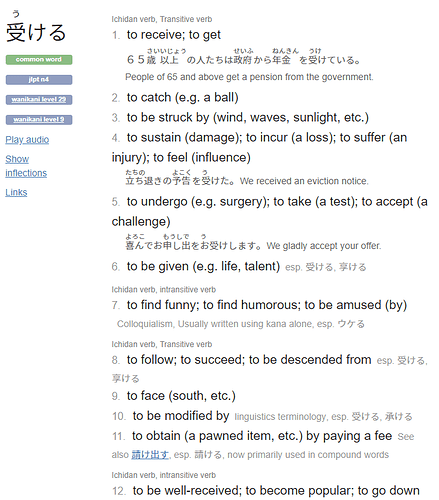 It’s because the source of the deck is the following list (although with quite some curation done by me and hine):

Apparantly this is how that word occured on most of the tests for the N4 back when the official vocab lists were still being supplied.

I don’t mind adding synonyms/extra info for the card though. If you see it again, could you “propose changes” (from the bottom left actions dropdown). That way I’ll be able to quickly update it. You don’t need to change anything, just flagging it this way is enough