Thought I’d share my experience if it helps anyone interested making their own deck and give Kitsun some feedback. I’ve made a few mini-decks already but I wanted to get a few books into decks that had great content and deserve an SRS platform. I tried Anki for a little bit I did not like the experience at all, swore to never to make any decks as the process was way too painful even though I knew many users had success with it. I found the premade decks overwhelming; I didn’t want all the choices but wanted something high quality but wanted to customize it. Finding Kitsun has considerably changed my attitude on this.

So I finally finished the N3 2000単語 Essential deck I started in back in October (would have finished sooner but this was just a small part-time project). I essentially used the Kitsun-Jisho function to derive all the vocab and then added sentences Jp/Eng sentences for each word along with uploading audio sentences that are provided by Ask-Publishing アスク出版. Using the sentences only, the deck is actually ~1400 (despite the 2000 label) and doesn’t include the mini-chapter vocab extensions so it’s pretty small to anything else posted here. However I really like the practical vocab selection and sentence choices they have and they integrate vocab multiple times in the sentences given the chapters are divided by theme.

First, the new default layouts look awesome! Seriously, it’s aesthetically the best looking SRS system I ever used. And it works really well with all the synonym function for Jisho-derived cards. Making the cards is a snap and there is no way I would have had the patience put add all the synonyms/word notes for an Anki deck or used their functions (or have it as accurate). The only time consuming portion was writing all the sentences and then uploading the audio.

Also, I get to have Eng->Japanese in a single platform! For those who want to speak better, this is really essential and would prefer if WK integrated this their system rather than having to using a separate 3rd party app. For this reason, I’m allowing the repeated WK vocab I encounter as I want the extra practice along with Eng>Jp and use the listening practice for all the sentences (failing N3 is another reason 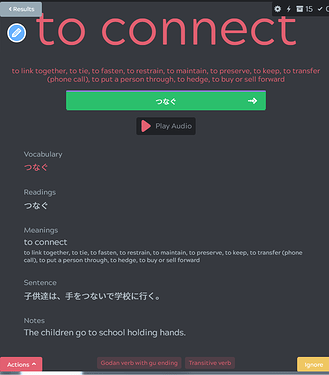 Another positive is customer service is really outstanding whether it’s feature requests (move cards to decks) or troubleshooting problems, Neicudi is on top of it and the site just keeps getting better and better along with a helpful community

Some areas that would have helped this process a little more: 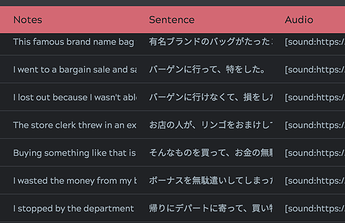 It’s sort of tricky how this can be a published deck but I’m happy to share if it’s possible. In my ideal world, Ask-Publisher would give their customers a Kitsun-code so they could unlock the deck and use their content in a SRS system. This way Kitsun gets promoted (as it should) as a superior SRS system with a larger customer base, アスク出版 has a way to promote their line and keep intellectual property without piracy and the customer wins. I’ve mentioned this too many times already so it’s probably annoying at this point…otherwise maybe there is another loophole because the audio sentences are essentially free and the content creation is driven by the Jisho tool, IDK.

Thank you for all the compliments!

I’ll reply to your points one by one:

As for the sharing, I’m not sure what the best course of action is here. If I look at similar platforms with shared content it doesn’t look like it matters much. On the other hand, I don’t want a deck like this to impact their sales and possibly cause copyright issues (audio). Having deals with publishers would be fantastic, but realistically speaking I think it would take a while until something like that would become possible.

Thanks for sharing your experience with us all! Much appreciated

Do they state which license they are providing the audio files under? If they say they are “free” it doesn’t only have to mean “for free”. Maybe they have no problem with a free deck.

I could add custom audio functionality to the default dictionary generation, but I’d really prefer to keep it as easy to use as possible. Putting custom audio there is yet another (or many, since it can be per field) button in the list that keeps on getting larger. Would adding it to the custom dictionary flow work for you?

That sounds entirely fair especially when when these custom workflows can saved and reused quite readily.

You mean the highlighting of a table row right?

Yes, exactly. My cheat was to scroll the current at the top but the highlight row is ideal

I’ll make it show all cell content upon hover. Someone suggested it before, but I forgot to implement it.

Nice idea, that would work too.

What about making the first few columns static so it always shows the edit button and checkbox?

That sounds great as well. This way the right side items can be seen while selecting card edits.

Sounds good to me, ESC alright? (or CTRL+S to save + close?)

Either one sounds good, I have no preference.

Thank you for considering the suggestions! These are are really small picky things but otherwise the card manager works really well but as you know, add up when you use it a million times.

Do they state which license they are providing the audio files under? If they say they are “free” it doesn’t only have to mean “for free”. Maybe they have no problem with a free deck.

When I got the audio that I had to add the ISBN number from the book to get the ‘free’ audio so that is their proof of purchase along with a registration. So it seems more like an advertising ploy to put on the book cover, don’t know if these can be freely traded unfortunately.

When I got the audio that I had to add the ISBN number from the book to get the ‘free’ audio so that is their proof of purchase along with a registration. So it seems more like an advertising ploy to put on the book cover, don’t know if these can be freely traded unfortunately.

I directly downloaded it from the link you provided, there are zip files for PC usage. In the zip there is a readme file, but they never mention anywhere what license they want, they don’t seem particularly worried about it.

I guess what is restricted is to reproduce the same list of words as in the book including the sentences because of their book copyrights.